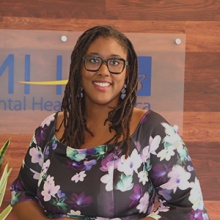 Caren Howard currently serves as the Advocacy Manager for Mental Health America under the Vice President of Mental Health Systems and Advocacy, and she has 10 years experience in political campaigns and advocacy.

As Advocacy Manager, Howard builds the MHA Regional Policy Council’s four yearly conference meetings, compiles resources and advises strategy to influence federal and state elected officials on a wide range of health care, education, and criminal justice policy issues, and facilitates relationship-building between MHA affiliates and their state and local elected officials through the Back Home Campaign. You may read some of her blog posts about mental health here: how the ACA repeal would hurt people, additional attempts to repeal the ACA, tips to talk to legislators, and a little bit about the 2018 budget request.

Howard joined MHA in January 2017 following her role as Finance Associate at one of the largest political consulting firms serving members of the House of Representatives, where she was a leading fundraiser for several Members of Congress. Prior to fundraising, Howard worked on Capitol Hill serving her hometown representative, Congressman John P. Sarbanes, as a Legislative Correspondent and she worked with former Majority Leader of the House Steny H. Hoyer.

Howard earned a B.A. in Political Science at Spelman College, the nation’s top-ranked Historically Black College and University for ten years. Howard continues leadership in the community as Board Chair of the African American Women on the Hill Network and Founder and Director of the Oakland Mills High School Alumni Program in Columbia, Maryland. It is very important to her that mental health promotion becomes a core foundation of our nation's health and education policy and programs. Email Caren.