Home » Acting B4Stage4 in Mental Health Will Save Millions of Dollars

Acting B4Stage4 in Mental Health Will Save Millions of Dollars

If Congress successfully reforms America’s mental health system, it could lead to huge savings in service delivery costs.  This is the only conclusion that can be drawn from an examination of available research on the subject.

Mental Health America has reviewed much of the recent research, and determined that when you act Before Stage 4:

This cost analysis builds on our earlier report demonstrating the human cost of not acting early.

Our conclusion is that it is imperative to change our public policy to embrace earlier identification and intervention, and integration of services, to prevent homelessness, incarceration, and disability among people with mental health concerns.  To change trajectories of lives for the better, we need to do these things as soon as we can.

In this overview, we are offering a brief summary of the research in each of three areas, and a list of references below.  Together this research offers the backbone of a compelling cost-benefit analysis for investing in upstream health and behavioral health services.

In our May is Mental Health Month B4Stage4 Campaign, we released this graphic to demonstrate the cost-savings of acting as early as possible: 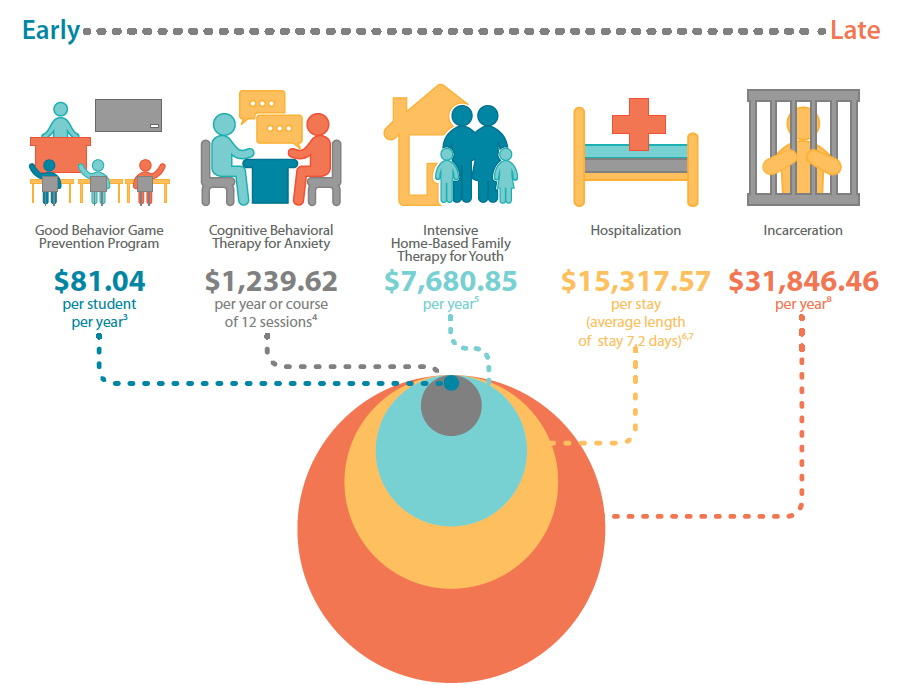 Mental illnesses are costly conditions, especially when treatments and services are delayed.

This figure appears to be for mental health only, and does not take into account added physical health spending that's a result of untreated mental health needs.

There is, however, a way to get an idea of some of those costs.  While the Centers for Medicare and Medicaid Services (CMS) does not break out mental health only as a co-morbid condition, it does offer additional information about the costs of co-morbid conditions in general. According to CMS, "costs roughly double between individuals with no physical or mental health condition ($875) and those with two comorbid condition groups ($1,628) and once again roughly double when individuals reach five comorbid CCGs ($3,940)."

People with untreated mental illnesses frequently experience chronic homelessness, and the costs associated with homelessness are not inconsequential.  There is a wide range of estimates about these costs.  At the low end, a Philadelphia study suggested that the cost was $7,500.  But at the upper end, researchers concluded that the cost could be as high as $65,000.

The Department of Housing and Urban Development (HUD) offers a number in the middle.  In a relatively recent article, HUD Secretary Shaun Donovan indicated that its figure is $40,000 .

Using the Vera Institute of Justice's estimates from 2012, the cost per inmate was $31,286.  A study from 2009 conservatively estimated that the prevalence of serious mental illness (SMI) is about 16%, and the total prison population is approximately 1,561,500.  The cost of incarcerating then would be about $7.8 billion.

While determining directly the impacts of mental illness on each of three systems (health, social services, and corrections) is difficult to calculate, it is not hard to estimate these costs, nor to create a database that supports the argument that it would be far less expensive to invest in alternatives to deep-end health services, and alternatives to homelessness and incarceration.  Federal legislation that includes funding for screening, early identification, and early intervention; programs supporting integration of health and behavioral health services; provisions to protect the rights of individuals to housing and mental health services; and provisions to end the incarceration of nonviolent offenders with serious mental illness will clearly all result in cost savings.