What is tardive dyskinesia?

To learn more about Living With TD, click here.​​

How common is tardive dyskinesia?

Tardive dyskinesia is estimated to affect at least 500,000 people in the U.S.[1]

Those who have been treated for schizophrenia, schizoaffective disorder, and/or bipolar disorder are particularly at risk.

The older a person is, the more likely they are to develop persistent and irreversible tardive dyskinesia. 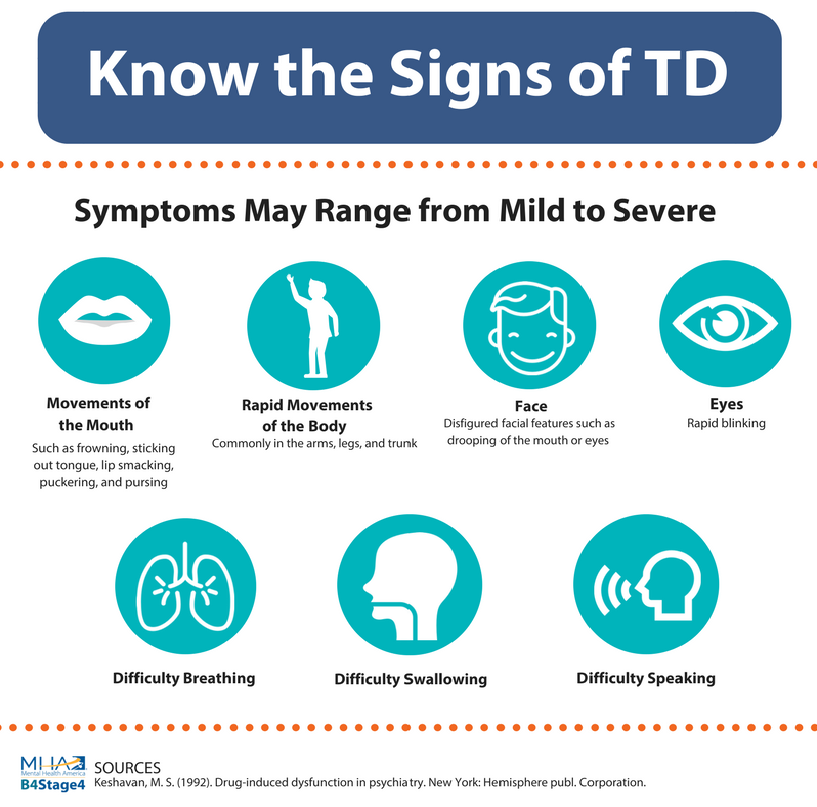 Tardive dyskinesia is characterized by repetitive and involuntary movements.

Features of the disorder may include:

Approximately 60 to 70 percent of the cases are mild, with about 3 percent being extremely severe.

Download this questionnaire to see if you, or someone you love may be experiencing signs of tardive dyskinesia.

While they both can result as a side effect of medication, the similarities stop there.

Additionally, the movements associated with tardive dyskinesia are more fluid and less jerky than spasms and stiffness experienced by those with Parkinson’s.

What can cause Tardive dyskinesia? [2]

Drugs that most commonly cause this disorder are older neuroleptics, including:

These are not the the only medications that can cause TD. Newer drugs that may cause tardive dyskinesia (although are less likely to cause it) include:

How is it treated?

There is no standard treatment for tardive dyskinesia. Most interventions focus on adjusting the medication thought to be causing tardive dyskinesia. In many cases neuroleptic medications will be adjusted to use the lowest possible dose, or discontinued if at all possible. Stopping the medication is a gradual process, lowering the doses 10 to 25 percent every one to three months. Replacing the neuroleptic drug with other medications may help some patients. Other drugs such as tranquilizers like benzodiazepines and medicines that mimic the effect of dopamine, may also be beneficial. Symptoms of tardive dyskinesia may remain even after the medication is stopped. However, with careful management, some symptoms may improve or disappear with time.

Tardive dyskinesia symptoms may take time to develop. On some occasions symptoms do not arise until after neuroleptic drug use has been stopped. For this reason, tardive dyskinesia may be hard to diagnose. If you think you have tardive dyskinesia seek medical attention through a neurologist. For a diagnosis, doctors should evaluate the length of neuroleptic drug exposure. Exposure does not need to be consistent but should continue for three or more months of use. They should also rule out other conditions that cause movements such as Parkinson’s or Cerebral Palsy and recognize symptoms in two or more body areas. [3]

New treatments for tardive dyskinesia have been developed and work by reversibly limiting the amount of excess dopamine. While these treatments have not been around long, they have shown great promise in clinical trials. If taking psychiatric medications, these new drug treatments for TD are meant to be taken in addition to existing medications.