Mental Health America works nationally and locally to raise awareness about mental health and ensures that those at-risk for mental illnesses and related disorders receive proper, timely and effective treatment. MHA incorporates culturally competent strategies to ensure that it is effectively addressing the treatment and psychosocial needs of consumers and families with diverse values, beliefs, sexual orientations, and backgrounds that vary by race, ethnicity and/or language. 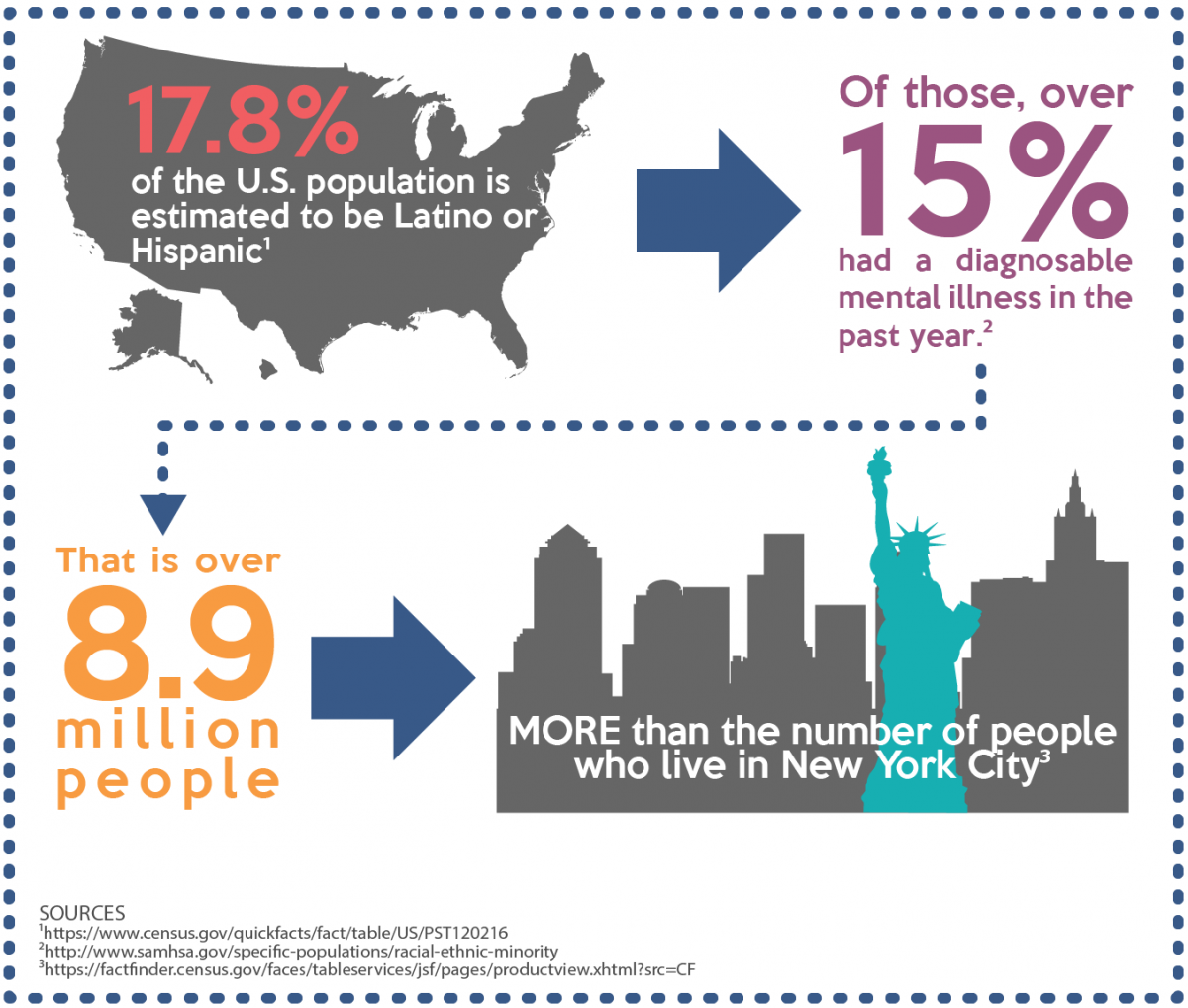 According to the U.S. Census Bureau [1]:

While some believe that Latinos have a negative attitude toward mental health care, and that this explains lower access rates when compared to non-Latino whites, there is very little recent research examining this issue or supporting this view. As reported in Psychiatry Online in 2009, “Hispanics or Latinos may have more positive attitude toward mental health treatment seeking than non-Hispanic whites,” suggesting that treatment barriers come about not because of negative attitudes, but because of other structural barriers to care, including language and socioeconomic factors. [2]

Lifetime prevalence rates among Latino Americans born in the U.S. are lower than those for non-Latino whites, vary among ethnic groups, and are higher among U.S.-born Latinos than they are among foreign-born Latinos. According to the 2008 article, “Prevalence of Mental Illness in Immigrant and Non-Immigrant U.S. Latino Groups” [3]:

Despite these generally lower rates, according to CDC data reported in 2012 [4]:

APA found that both language barriers and values created barriers to treatment.

The American Psychiatric Association digested several recent studies in a 2014 fact sheet. [6]   Among its highlights, it found that:

According to research reported in Health Services Research in 2013, 40 percent of whites with a probable need for mental health services reported that they would seek treatment, versus only 27 percent of Latinos.

In addition, in April 2014, Mental Health America launched a suite of online mental health screening tools on its website (www.MHAscreening.org). In analyzing a sample of over 50,000 screens, MHA found that significant percentages of Latino respondents indicated that they would either self-monitor their mental health or seek guidance from a peer.

Both of these finding echo earlier statistics from the “Mental Health: Culture, Race and Ethnicity Supplement” to the 1999 U.S. Surgeon General’s Report on Mental Health, which found that among all Latinos with mental disorders, fewer than 1 in 11 contact mental health specialists, while fewer than 1 in 5 contact general health care providers.

According to US Census data (2011), prior to the passage of the Affordable Care Act, 30 percent of Hispanics lacked health insurance, versus 11 percent of non-Hispanic whites.

Mental health conditions, such as depression or anxiety, are real, common and treatable. And recovery is possible.