With laws in many states allowing the use of marijuana under a variety of circumstances, it is important to understand how it can affect mental health and when its use becomes a serious problem. Please note- this webpage is speaking about marijuana in general and not CBD or other derivatives.

Availability is increasing. Attitudes are changing.

Marijuana use is higher among people with mental illnesses

When does marijuana use become a problem?

Marijuana use becomes a problem when it interferes with a person’s ability to function in their personal and/or professional lives.

In the past year have you:

If you have experienced two or more of the following signs in the past year, you may have Marijuana (cannabis) Use Disorder.[7]

Can marijuana cause mental illnesses?

More research is needed for a clear answer to this question. Here's what we do know:

Much of the research supporting the use of marijuana or cannabis as a treatment for mental illnesses is based on:

In some states that have legalized medical marijuana, it can be prescribed to reduce symptoms of Post-Traumatic Stress Disorder (PTSD) or stimulate appetite in people with anorexia. Depending on the state, doctors may also be able to prescribe marijuana for other mental health problems (like anxiety) at their discretion if traditional methods of treatment have not been successful. 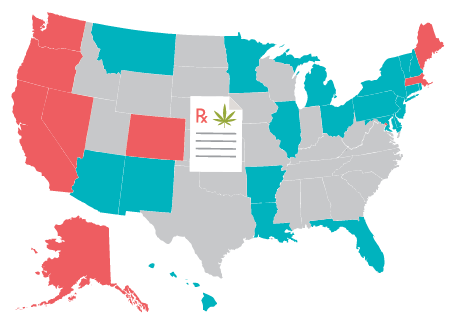 Take control of marijuana use

If you need help

[5,6] SAMHSA. Center for Behavioral Health Statistics and Quality, National Survey on Drug Use and Health, 2014 and 2015.