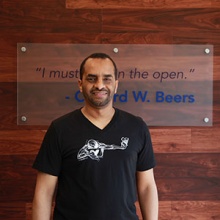 Mohamed became Senior Web Developer of Mental Health America in April 2017. As the Web Developer, Mohamed has the responsibility for oversight of the websites & servers’ system.

Mental Health America (MHA) – founded in 1909 – is the nation's leading community-based nonprofit dedicated to addressing the needs of those living with mental illness and to promoting the overall mental health of all Americans.

Prior to his role with MHA, Mohamed served as Web Developer for the National School Boards Association, a nonprofit educational organization operating as a federation of state associations of school boards across the United States.

Mohamed has been in numerous positions with national/local government entities, as well as multi-national organizations, Alexandria Redevelopment & Housing Authority (ARHA), USAID and The World Bank Group among others. He received a recognition award from The World Bank Group for his extraordinary work.

A native of Cairo-Egypt, Mohamed moved to USA in late 2006. He watches soccer and lives with his wife and 2 sons in Alexandria, Virginia. He’s also fond of languages, automobiles, electronics and science.